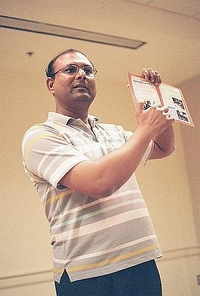 We were excited to hear that long-time Hesperian collaborator Balaji Sampath (of Chennai, India) was awarded a Fellowship for Innovative Social Entrepreneurship jointly by the Ashoka Foundation and the Lemelson  Foundation. Balaji won the fellowship for “revolutionizing the way science is taught in India through low-cost materials promoting hands-on learning and creative dissemination techniques.” Click here for more information about the fellowship.

While that is certainly true, there is so much more to say about Balaji’s years of passionate commitment to and hard work for health rights and social change.

We first met Balaji in 2000 at a meeting Hesperian convened in New Delhi to bring together all the organizations translating WHERE WOMEN HAVE NO DOCTOR in South Asia. People developing a dozen different language editions spent 3 days discussing the problems and solutions they were encountering in adapting the book for their varied cultural contexts. Representing the Tamil Nadu Science Forum and the Association for India’s Development (AID), Balaji was working to transform the book into a series of pamphlets to use as health promotion and literacy tools with poor women.

The pamphlets were used in the Hundred Block Plan, an ambitious project in which “blocks” of about 30 villages were organized to address the health needs of about 30,000 families. This project was later judged one of the ten best projects in the world by UNICEF.

You can get a sense of the down-to-earth, activist orientation that Balaji brings to his work from a talk on “Science and Technology for Social Empowerment” that Balaji gave in June 2000:

How we fight inequality. We work with women’s groups. The idea is not to save and give some loans. That is important, but the idea is to work for women’s equality. After the literacy campaigns, we started an organization called Samata (equality). You start a women’s group, you say, “Is wife-beating a problem?” Often they say: “It’s OK, that guy can beat me. I talked too much, that is why he beat me. It’s fair enough.” OK, wife-beating is not a problem, but excessive wife-beating they see as a problem: “I wasn’t even talking, and still he beat me.” They think that is unjust. So you say, “OK, why don’t you organize? Whenever you see whatever you call excessive beating, as a women’s group, go and stop it.”

Organizing works. If a man intervenes in wife-beating, the woman’s husband will tell him to get out, that this is a family matter. He may accuse his wife of having a relationship with the man. If a woman intervenes, that is still a problem. But a women’s group has a legitimate claim, because the victim is a group member. Sometimes the women’s group beats up the man, sometimes it just threatens to beat him. Now that the women’s group recognizes that it can address excessive wife-beating, the question of what is excessive comes up. “When I talk, why can’t the fellow talk back? Why should he beat me?” Then comes the question of sharing housework. Equality is still far away, but at least sometimes the husband will look after the child…

Hesperian congratulates Balaji on winning this fellowship and we look forward to working with him and his colleagues for many years to come.