stay connected
Home > Blog > Health as if ALL people mattered

Dr. Halfdan Mahler on “Health for All” and the Peoples’ Health Movement 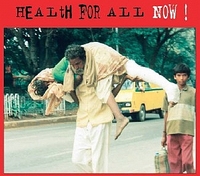 Dr. Halfdan Mahler of Denmark served as Director-General of the World Health Organization from 1973 to 1988. Under Dr. Mahler’s leadership, WHO launched the “Health for All by the Year 2000” strategy following the Alma Ata Conference.

Dr. Mahler continues to promote Health for All. He attended the first and second People’s Health Assemblies, and many other Peoples’ Health Movement  activities. In the letter below, sent to the second Indian National Health Assembly of the People’s Health Movement – India held last week in Bhopal, he challenges us to create a world in which the conditions that make health possible are available to ALL.

The question that keeps being raised is: “Can health truly form a leading edge for social justice, especially when we are dealing with situations where the basic issue is survival; where people are tapped in the vicious circle of extreme poverty, ignorance and apathy?”

I can best answer this question by referring to the events that lead to the creation of the Health for All Movement and to this movement, in my opinion, becoming a leading edge in the promotion of equity and social justice.

The World Health Assembly decided in 1977 that the main social target of governments and WHO in the coming decades should be the attainment of what is known locally and globally as “Health for All.” The World Health Assembly described that as a level of health that will permit all the people of the world to lead socially and economically productive lives. Please note that the World Health Assembly did not consider health as an end in itself, but rather as a means to an end. That end is human development, as characterized by social and economic productivity and well-being. You will also note that the social aspect preceded the economic aspect. That is also as it should be. When people are mere pawns in an economic growth and profit game, that game is so often lost for the poor. But when people themselves can contribute actively and voluntarily to the social development of the society in which they live, whether in such fields as shaping public policies, providing social support to others, undertaking voluntary action for the health and education of society, or through all kinds of spiritual and cultural activities, in other words when people are socially productive there is much hope for economic productivity too.

This morally binding contract of Health for All was the basis of the Primary Health Care strategy which implied a commitment not only to a reorientation of the conventional health care systems–which rather should be called “medical repair systems”–but to a radical shift towards people`s own control over their health and well-being… This implies a continuous empowerment process whereby people acquire the skill and will to become social carriers of their own health and well-being.

I believe that the fundamental values of social justice and equity are firmly imbedded in the vision of Health for All and the strategy of Primary Health Care. And this vision and strategy can indeed be strong forces and leading edges for achieving social justice and equity. Health may not be everything, but without health there is very little to individual and social well-being.

But, most importantly, Health is Politics and Politics should be Health as if ALL people truly mattered. And the Peoples’ Health Movement in India must be the permanent conscience of such politics in your wonderful country. In realizing this oh so difficult conscience role I admire you for having found in the Human Rights paradigm the cumulatively energizing support of this role. We must not let today’s local, national and global injustices take over. Indeed WE MUST NOT.

With my warmest thoughts and good wishes,

Your friend and admirer,