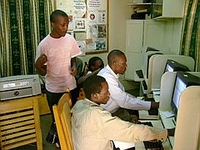 Hesperian recently implemented something new on our website. We’ve started asking people for their names, their countries, and their email addresses when they go to our free downloads page. This information is entirely optional – you can still download any of our materials even if you don’t want to give us your name – but we were curious about who actually downloads our materials, and where everyone lives.

Were we surprised! In the first two weeks since we started asking, we’ve had over 900 people from 97 countries around the world sign in! Outside of the US, the countries from which the most people contacted us were India, followed by Nigeria, the United Kingdom, Canada, Kenya, Pakistan, Mexico, and Australia. Virtually every country in South America and in Southeast Asiais represented, plus a majority of the countries in Africaand in Eastern Europe. Even most of the countries in the Middle East show up, including Egypt, Palestine, Israel, Saudi Arabia, Iran, Iraq, and Lebanon.

We’re thrilled to know that people in so many countries have heard of Hesperian, and that our downloadable materials are being so widely used. And if you haven’t checked our free downloads page, come on by! Who knows, you may be the 98th country represented.