Health activist Dr. Gopal Dabade recently came to Berkeley to speak on the ongoing struggle against Swiss Pharmaceutical company Novartis in India. Dr. Dabade is a Hesperian partner who developed the Kannada edition of Where There Is No Doctor, and he has long been working for the rational use of essential medicines. 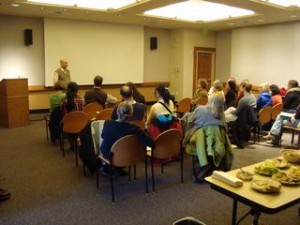 For decades, India has been known as the “pharmacy of the developing world” for its ability to supply lifesaving generic drugs at a fraction of the cost of those with brand names. People living in India and throughout the Global South rely heavily on these affordable medicines, and without them antiretrovirals, cancer drugs, and hundreds of other basic medications would be out of reach for millions.

However, this fall Novartis appealed a case to the Indian Supreme Court pushing for a more aggressive patent law that would jeopardize the country’s generic drug industry. Currently, India’s law requires real innovation to obtain a new patent. Section 3(d) of the Indian patent law prohibits ‘evergreening,’ a strategy where pharmaceutical companies make small, trivial changes to existing medicines in order to extend the period of patent control on a drug, and thereby extend their profits as well.  Removing Section 3 (d) would enable multinational corporations to gain monopolies over already existing drugs and prohibit cheaper generics.

Novartis is challenging Section 3 (d) in order to obtain renewed patent protection of a leukemia drug imatinib mesylate, which it markets as Glivec. Glivec is a drug that has been available for 16 years, but Novartis is seeking a new patent for a recently developed crystalline form. This change is simply a different form of the original compound and does not increase the drug’s efficacy. Gaining patent control would force generic versions out of the market, and put this drug (priced at $2,500 per month by Novartis compared to $175 per month for an Indian generic version) out of reach for 99% of patients who need it.

Novartis argues that “intellectual property rights are an essential safety net to protect the substantial investment of time and money required to bring a drug to market.” However, granting patents for drugs that are neither new nor more effective is not a rational use of intellectual property rights. Further, as Dr. Dabade pointed out in his presentation, it has been shown that more than 40% of the industry‘s research and development (R&D) is aimed at producing minor variations of existing drugs, not at turning out new ones, and that marketing costs are double what is spent on R&D.

This case could endanger the availability of affordable drugs around the world, as the fate of thousands of similar ‘evergreened’ patent requests pending in India rest on this decision. If Novartis wins, accessibility of essential medicines for millions will be eliminated, and pharmaceutical companies will rake in billions more, adding to their already bloated profits at the expense of the world’s poor.

We urge you to take a stand against corporate greed and placing profits before people’s lives. Please join us, Dr. Dabade, and the People’s Health Movement in the fight for health for all by signing the petition against Novartis.  Contact [email protected] if you would like to learn more about how to get involved.