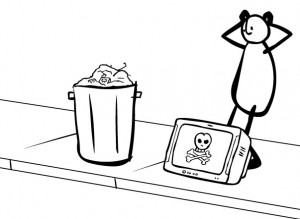 Today, our partners at the Story of Stuff team released a new film – The Story of Electronics: Why ‘designed for the dump’ is toxic for people and the planet.

You may already be familiar with the Story of Stuff Project – they created a series of wildly popular web videos that expose the hidden costs of the consumer products we buy and toss at alarming rates. You can buy the DVD of Story of Stuff in English or Spanish, as well as the full-length book The Story of Stuff (352 pages of great information) on our website.

The Electronics TakeBack Coalition partnered with them on this new film, which asks why we throw away millions of tons of electronics every year, and what that means for the planet. You can watch the film here.

The timeliness of The Story of Electronics can’t be overstated, as the impact of the electronics industry on the health and lives of electronics workers around the world is coming into a global spotlight. In the current issue of Ms. Magazine, an article by Lily Bixler titled: “Korea’s Electronics Scandal: Why are Samsung’s women workers getting cancer?” quotes a Korea Occupational Safety and Health Agency report:

“…incidences of non-Hodgkin’s lymphoma among the companies’ women workers—including at Samsung—were 2.67 times that of the general population. For women assembly operators, the rate of lymphoma was an astonishing 5 times higher.” 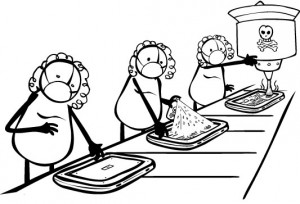 You can learn more about health problems at Samsung on Tuesday November 16th at 5:30 pm, when Dr. Jeong-ok Kong MD MS of Korea will be speaking at Hesperian’s office about her work with SHARPS (Supporters for the Health and Rights of People in Semiconductor Industry). Dr. Kong, who is working with Hesperian in the development of A Worker’s Guide to Health and Safety, has just received the OHS Section International Award from the American Public Health Association.

Hesperian staff writer Miriam Lara Meloy learned about electronics workers health problems when she visited the export processing zone of Batam, Indonesia after the annual meeting of the Asian Network for the Rights of Occupational Accident Victims, ANROAV. This article by Elizabeth Grossman in the Pump Handle gives an overview.

And finally, our friend Madhu from Bhopal has just written us about incidents at a Foxconn plant in India. As you may recall from our June blog, Foxconn’s electronics plants in China were the site of a series of worker suicides earlier this year. From India, Madhu writes:

On 23rd July …in the assembly section, 120 workers complained of breathlessness, vomiting, giddiness and fainted. They were taken to Jaya Hospital in Sriperumbadur and discharged within an hour. During the night shift…107 workers complained of similar symptoms, including two workers vomiting blood. …Some of the workers from the morning shift, who were discharged by Jaya Hospital, fell sick again by the evening, and were taken to [another hospital]. 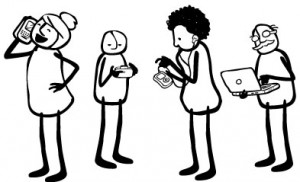 The Story of Electronics is not only a story of threats to the environment from the overconsumption of electronics and problems with their disposal, but of the very real threats to the lives of workers who make these gadgets that we so hungrily consume.