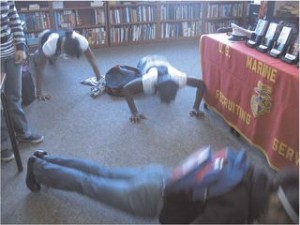 Should We End Military Recruiting in High Schools as a Matter of Child Protection and Public Health?

Amy Hagopian is an Assistant Professor at the University of Washington, and a long time friend of Hesperian who is now under attack by Bill O’Reilly of Fox News. Hesperian’s Director, Sarah Shannon, has worked with Amy on the Governing Council of the American Public Health Association, and in various activities within the International Health Section of the APHA and the People’s Health Movement.

O’Reilly is attacking Amy’s well-researched and thought-provoking study, “Should We End Military Recruiting in High Schools as a Matter of Child Protection and Public Health?” published in the American Journal of Public Health. The study, co-authored with Kathy Barker, makes the case that military recruiters in high schools are a violation of the UN Convention on the Rights of the Child and a threat to the public health of adolescents. We’re sharing a link to Amy’s excellent paper, and an article from the Huffington Post denouncing O’Reilly’s attacks on her.

In my mind, when the Fox News star Bill O’Reilly decides to make you a target, it’s a badge of honor. This is a man who politically is a proud Islamaphobe, declaring, “We have a Muslim problem, not a Muslim extremist problem.” And personally? Anyone who likes to tell people how his “happy ending” masseuse thinks he’s well endowed clearly has trouble distinguishing fantasy from reality.

That’s why his latest attacks on University of Washington Assistant Professor Amy Hagopian tells far more about the twisted mind of O’Reilly than the serious study the professor authored. Hagopian wrote an academic paper for the American Journal of Public Health making the case that military recruiters in high schools were in violation of the UN Convention on the Rights of the Child, a threat to the public health of adolescents, and even suggesting military recruiting behaviors were akin to — as she put it — “predatory grooming.” It’s a serious, data-packed analysis of the way recruiters have manipulated information and targeted the most economically disadvantaged students to fill the ranks of those fighting and dying in Afghanistan and Iraq.

The overarching thesis of the study is hardly shocking or groundbreaking. After all, we know that in 2005, the Army ordered its recruiters to “stand down” for a day of retraining because of habitual mendacity. We know the intense pressures on military recruiters to meet quotas has led to a series of high profile ethical violations. I know from my work at DC area high schools that the recruitment booths aren’t set up at elite institutions like St. Alban’s or Georgetown Prep. They’re at public high schools like Ballou and Bell. In other words, recruiters fish in places where young people have fewer options. Hagopian’s academic study simply backed up what has been over the last five years, a very public scandal. This is what I thought when I read her paper.

When O’Reilly read her paper…. all right let’s stop there. I will contend there is no way Bill O’Reilly actually read her piece. None. He doesn’t reckon with any of Hagopian’s sobering data. He doesn’t reckon with the suicide rates among troops, the effects of exposure to depleted uranium, or any of the ways that the realities of war are fudged over by recruiters to fill their quotas. There is just O’Reilly doing his neo-McCarthyite best to chill free speech. All O’Reilly needed was Hagopian’s use of the word “predatory” when describing recruiters. Next thing you know, he was hitting the airwaves attacking Hagopian for calling recruiters “child molesters.”

This is sick. Why this is where O’Reilly and his producers’ minds go is honestly between them and their internet browsers. But tragically, when he sends his shock troops into battle, they can damage a person’s life. Now, Amy Hagopian, for the unholy crime of conducting academic inquiry into a public scandal, has been harassed by O’Reilly’s loyal listeners. They have sent threatening letters and emails to the school offices. They have made a series of profane phone calls to her colleagues. They have contacted her university and demanded that she should be fired for writing what is a peer-reviewed publication in the primary journal of public health in America. Please take a moment and imagine if that was you. Imagine if you created a contribution to public discourse to provoke discussion and debate. Imagine if you were ready to defend your findings against others who would surely disagree. And then imagine if instead you found yourself a personal target for a reactionary media giant using his outsized pulpit to make your life a living hell. That’s not journalism and it’s not punditry. It’s the actions of an obscene, indecent bully. If there is one object lesson I’ve learned about O’Reilly’s character from these attacks, it’s that he clearly despises women who tell sobering truths. I suppose he just wants them to administer happy endings.

Photo by K. Barker, from the AJPH paper: Students at Garfield High School in Seattle, WA, drop to the floor for pushups under the command of a military recruiter at the school in 2009