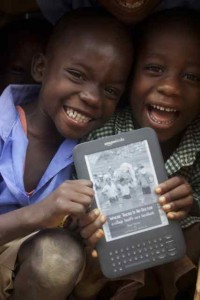 It’s been a big year for Where There Is No Doctor, the lifesaving title first published in 1973 in Mexico’s Sierra Madre. Not only is the book celebrating 40 years in circulation, with 28 editions, an astonishing 81 translations, and distribution in 221 countries and territories—this month the book launches for the first time a san e-book for Kindle.

To increase free access to empowering health information around the globe, Hesperian has partnered with Worldreader, the San Francisco-based organization co-founded by former Amazon.com executive David Risher. Together, Hesperian and Worldreader will load Where There Is No Doctor onto thousands of Kindles in African schools, providing unprecedented access to the critical medical information contained in the text and illustrations.

Worldreader has already distributed over 440,000 e-books in Ghana, Uganda, Kenya, 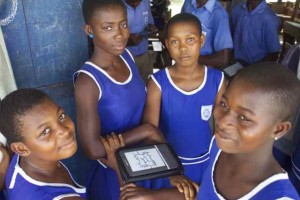 Malawi, Rwanda, and Tanzania in English, Kiswahili, Kinyarwanda, and Twi; and the number is growing quickly.  The organization has been hailed as a leader in harnessing technology to increase literacy in the Global South, particularly sub-Saharan Africa. In 2012, Worldreader approached Hesperian about the possibility of providing Hesperian titles for their Kindles in Africa, explaining that the people who had already received Kindles were requesting access to Where There Is No Doctor. They had heard of it or seen a copy in their communities, but they wanted reliable access to this health information on their Kindles. 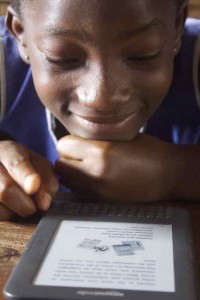 “For us, it was a no-brainer,” says Hesperian’s Executive Director, Sarah Shannon. “Our Gratis Books Program [a donor-supported book donation program run by Hesperian volunteers] is a wonderful resource for community health workers, but is limited by shipping costs and other factors. Through the partnership with Worldreader, we saw an opportunity to exponentially increase access to the information in Where There Is No Doctor and continue to address the underlying causes of poor health insub-Saharan African communities that lead to preventable, treatable diseases.”

Preliminary evaluations have shown that Worldreader Kindles are making a big difference; students are reading more, and standardized test scores are up. But these things are facilitated not just by donated e-reader devices, but by working closely with local organizations, teachers, and community leaders to create literacy-building programs that are fun, educational, and have the buy-in of those who will be implementing them.   Where There Is No Doctor fits seamlessly into this well-laid framework, providing health information in a highly illustrated, easily understood format that is accessible across language barriers and literacy levels. Where There Is No Doctor is updated nearly every year based on input and feedback from thousands of grassroots community health workers and medical practitioners from all backgrounds, so it is culturally appropriate and relevant to the realities of the Global South.

The partnership between Worldreader and Hesperian also presents possible new opportunities for collaboration to improve health through other mobile devices. Hesperian’s 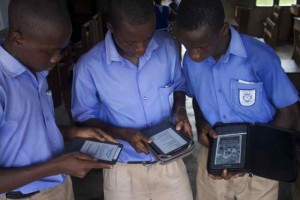 mobile app, Safe Pregnancy and Birth, has been downloaded over 80,000 times in English and Spanish since it was released in 2012 and is the winner of the Ashoka Changemakers/Intel “She Will Innovate” award. Worldreader’s partnership with mobile software developer BiNu has garnered accolades as it has delivered books via low-end feature phones to well over 500,000 readers in Africa and India.  With a recent USAID study reporting that nearly every household in sub-Saharan Africa has access to a mobile phone, the possibilities for improving and increasing access to information appear limitless.

All photos provided by Worldreader and used with permission.