“Midwives provide amazing services to our communities. Aside from assisting with births, they’re a great resource for reproductive health, family planning, and STD information. They are well connected with communities, and distribute critical health information.” – Kaya Skye, African Birth Collective 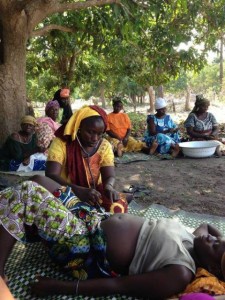 When Kaya Skye moved to the northern Mboro region of Senegal in 1996 to research topics in medical anthropology, she found herself fascinated by the state of maternal health. She observed that healthcare workers were being pushed to adopt western birthing practices, but the government- sponsored training was not explaining the rationale for certain actions. For example, health workers were taught how to take blood pressure, but not why it’s important or how high blood pressure could affect a pregnant woman. “But these women are incredibly intelligent and capable of understanding and doing so much more,” says Kaya. She also noticed that along with the westernization of birth care, the more natural approach that had underpinned the work of local midwives for centuries was being lost. Now, instead of natural births, midwives have “rushed births by overusing drugs such as Pitocin,” said Kaya, “which has been a major source of infant mortalities.”

Over the past 18 years, Kaya and a diverse group of health workers and midwives from the United States and Senegal have pioneered midwifery trainings that fuse modern medical advances with traditional Senegalese practices. The African Birth Collective has designed an exchange program between Senegalese and North American midwives to observe and learn from each other’s work. This approach has led to “more sustainable change – midwives will ask each other why they adopt certain practices, and then we’ll have long meetings where we debate these processes and come to a better understanding about these issues. It allows for a longer lasting change in knowledge and practice.” 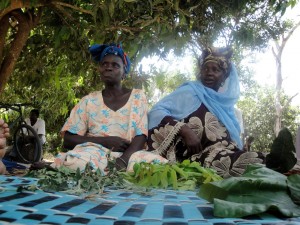 Traditional Midwives in Kabar with their medicinal herbs.

The African Birth Collective has also helped to coordinate the construction of Kassoumay Traditional Birth House, and works with different clinicians all over the country to improve the quality of birthing care, encouraging conversations between traditional birth attendants and clinicians. Their work has resulted in improved in birth outcomes, and increased participants’ overall understanding of the birth process. Instead of overusing medications, which Kaya says “focuses on pushing the baby out,” midwives have reclaimed the more traditional roles as “supporters who wait for the process to happen if all the vital signs are fine.”

The African Birth Collective has also undertaking a translation of Hesperian’s A Book for Midwives into French. A long list of midwives from the Congo, Burkina Faso, Haiti, Guinea, and other francophone locations eagerly await its publication. The Collective anticipates it will have “a massive impact on midwifery practices,” since there are very few French language training materials available that are suited for rural birth attendants. Unlike other resources, A Book for Midwives is simply written, easy to use, and contains many helpful illustrations that reinforce difficult concepts and valuable skills.

In addition to the comprehensive pregnancy and birth information in A Book for Midwives, the general health content (on topics such as nutrition, HIV, STDs, and how to perform pelvic exams) will help strengthen larger public health campaigns. Kaya stresses the importance of midwives in Senegal, saying that “often, outside public health projects will publish brochures and make billboards, but this doesn’t usually change people’s behaviors. They want to hear medical advice from someone they know and trust in the community, like their local midwives. The more effective these people are, the better these public health campaigns can be.”

Find out more about the work of the African Birth Collective and their partner, Mother Health International.

To better support midwives in their efforts to meet the health needs of their communities, and in honor of International Day of the Midwife, we are today releasing new, lifesaving information on cryotherapy, an accessible treatment to prevent cervical cancer, available in the HealthWiki and as a free PDF download. While the simple “vinegar test” has for more than a decade identified women at risk for cervical cancer, it is only recently that giving midwives and other local health providers the training and tools to take the next step and prevent cancer from developing has been proven accessible, safe and effective. Once again, Hesperian is leading the way in making this life-saving information available in easy-to-read, heavily illustrated pages. This cryotherapy information will support midwives and health workers in their struggle to save hundreds of thousands  of women’s lives.