Dr. Martin Luther King, Jr. once said, “Of all forms of discrimination and inequalities, injustice in health is the most shocking and inhuman.” Fighting for economic, racial, or reproductive justice is made all the more challenging when faced with the triple threat of increased illness, inadequate resources to find care, and discrimination in care. People with more resources are better equipped to fend off health problems, while poor people and historically marginalized groups are stuck with what they’ve got. That’s why putting health information into the hands of people who don’t have it is so important, and why Hesperian has been publishing materials that provide strategies for organizing and learning at the grassroots level for years. In the United States, African-American, Latino, and immigrant workers disproportionately work in occupations made unhealthy by policy and practice. Jobs in agriculture, meat packing, trash collection and construction present physical health risks that include vehicle rollovers, heat exposure, falls, musculoskeletal injuries from hazardous equipment, unsanitary conditions, floods, gas explosions, chemical exposure, infectious disease, and back injuries. The social hazards of work including discrimination and the theft of already low wages too often add to these health effects because workers are coerced into accepting poor working conditions or risk losing their jobs. These are but a few examples of the dangers to health that many poor people must risk to earn wages for their families.

In 1968, Dr. King spent his final days in solidarity with such workers, joining striking African-American janitors in Memphis in their call for greater safety at work. Despite prior pleas to improve safety on the job, two workers were crushed to death during “normal” work duties. It’s no surprise, then, that Dr. King was called to action, having proclaimed for years that inspiring a lasting movement for genuine equality must take into account all the factors threatening its presence:

“Our needs are identical with labor’s needs: Decent wages, fair working conditions, livable housing, old-age security, health and welfare measures, conditions in which families can grow, have education for their children, and respect in the community.” 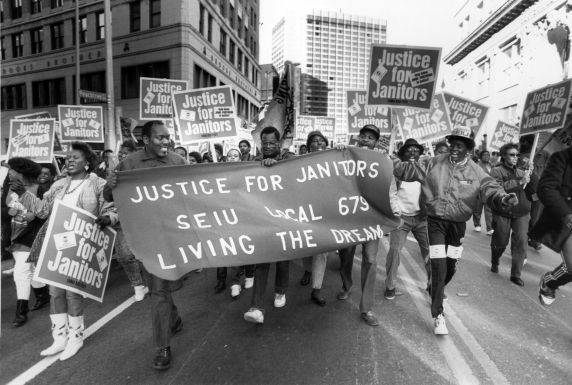 While many of our challenges today echo the challenges of the Civil Rights Movement of the 1960s, we’re using new tools to share ideas. Facebook, cellphone videos, and wikis allow people involved in modern social justice movements to share messages more quickly and easily in a networked, people-centric, and horizontal way. The Civil Rights Movement of the 1960s counted on word of mouth and a powerful central leadership, but today, modern communication tools allow each of us to advocate for ourselves and our communities in a way that wasn’t possible in Dr. King’s era.

Just this past autumn, low-wage worker Terrence Wise spoke to President Obama as part of the movement for income equality, while Black Lives Matter activists challenged presidential candidate and Former Secretary of State Hillary Clinton. Dr. King’s legacy laid the foundation for activists of color to be heard directly, without representation from a central leader as was the only option for African-Americans in the 1950s and 1960s. In that era, above board and below, the system worked against them. Today, even with supposed equal protection under the law, institutional legacies of racism and structures of injustice suppress that theoretical equality, and modern movements must fight to help all marginalized people realize their rights with that in mind. On Martin Luther King Jr. Day, we have the opportunity to reflect on and celebrate our progress, while continuing the fight in new ways. Dr. King did this when he expanded the focus of the Civil Rights Movement to a broader Poor People’s Campaign, in recognition that racial equality implores economic justice. Today, we recognize that the call for health equity does the same, for, as Audre Lorde famously said, “we do not live single-issue lives.”

That means that we don’t leave our health problems at the door when we go to work; workplaces need to protect — and definitely not worsen — our health. Hesperian’s new resource, the Workers’ Guide to Health and Safety provides workers with tools and ideas to make changes to their worksites that will improve their health outcomes and mitigate safety risks. By sharing tools that allow us to examine and change the underlying root causes of poor health, we can fight for health for all. Supportive of a decentralized leadership and workers’ own abilities to organize for change, Workers’ Guide to Health and Safety begs the question, why should the price of a paycheck be our health?