Home > Blog > From Rana Plaza to May Day

April 24 marked the 3rd anniversary of the Rana Plaza factory collapse in Savar, Bangladesh. This completely preventable disaster claimed the lives of 1,134 garment workers and left thousands injured. While some long-delayed compensation to workers and their families was finally distributed from US and European brands producing clothing in Bangladesh, the most necessary compensation has not been forthcoming: a change in the way the global garment companies contract to make the clothing we all wear. 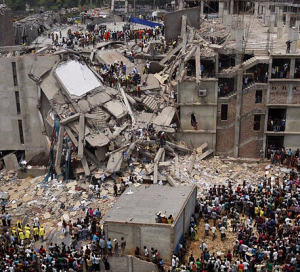 Health and safety and working conditions in the global garment industry continue to be deplorable. The international clothing companies, led by US brands such as Walmart and Gap, and European companies such as Inditex and H&M, continue to seek the lowest wages and least regulated environments in order to keep costs down and profits up. In Bangladesh, many of the contracted garment factories do not pay the minimum wage, which itself is not enough to live on.

The Rana Plaza disaster did lead to some changes in Bangladesh. The labor code was updated to better allow for union registration and the formation of safety committees; however, the unionization rules have been met with employer sabotage and the emergence of blacklists. The safety committees have yet to be organized. Two institutions were formed with brand participation, the Accord and the Alliance, which have mostly carried out building inspections of the garment factories, but both efforts were designed as 5-year programs, scheduled to disappear in 2 more years, at which point all agree little real change will have occurred. Unfortunately, the sacrifices made by the workers of Rana Plaza seem to have been made in vain.