The term ‘climate melancholia’ has been coined to describe a state of heightened despair about climate change and the future, but many youth leaders are fighting back against this apathy by leading powerful climate action campaigns. 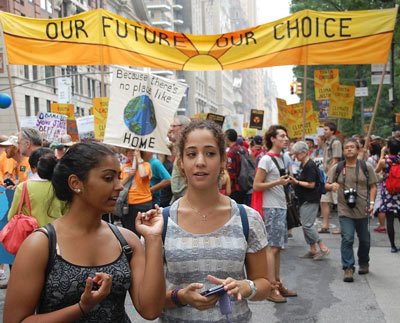 Teens won a victory in the Massachusetts Supreme Court this May, obliging the state government to reduce carbon emissions by 80% by the year 2050. Youth in Oregon have filed a similar suit, and there is another underway against the federal government. Worldwide, young people are spearheading the fight for cleaner energy, water, and air.

As the World Social Forum just concluded in Montreal, Canada, the Youth Space was perhaps the most vibrant area of activity. Amongst many others, teens from Togo shared their experiences of ecological villages, and First Nations young women talked about making commitments for 7 generations.

Hesperian offers materials to support, encourage, and expand their work. A Community Guide To Environmental Health has information about clean energy, community organizing, and the perils and benefits of using legal systems while fighting for change. Health and climate activists worldwide can read this information in English, Spanish, Russian, Portuguese, and Chinese.

Other environmental resources available from Hesperian include The Barefoot Architect: A Handbook for Green Building, a comprehensive guide to building simple homes using modern and traditional techniques; Changing Planet, Changing Health, stories combined with cutting-edge scientific information to show the health effects of climate change; and The Story of Stuff, which exposes connections between environmental and social issues, and calls us together to create a fairer, more sustainable world.