The war in Yemen that has already killed thousands through bombing and starvation is now killing thousands more with one of the worst cholera outbreaks on record, over 300,000 reported cases. South Sudan, already struggling with fighting among armed factions and the threat of famine is now also facing a cholera outbreak. Cholera spreads when water is contaminated with human waste but people still must use it for their daily needs. 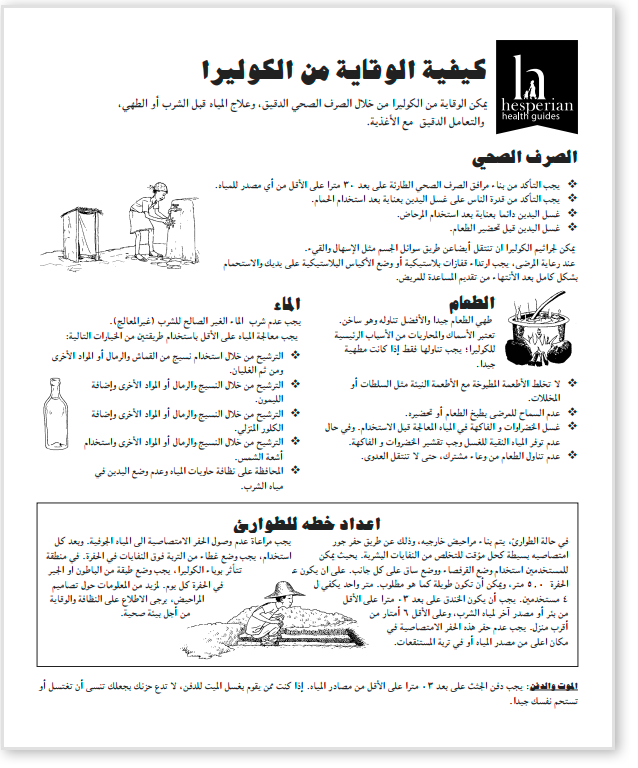 In both Yemen and South Sudan, thousands of people are seeking care in overburdened, overcrowded hospitals where dedicated health workers are doing their best to treat them with few supplies and limited support. The World Health Organization had pledged to send one million doses of a cholera vaccine to Yemen, but has now backed out of that plan saying the outbreak is too widespread, the situation too unstable. World powers that are fueling the ongoing conflict in Yemen are choosing to ignore this “collateral damage” of war.

Cholera is preventable when people have access to clean water for drinking, cooking, and sanitation and when human waste can be disposed of safely. Where There Is No Doctor, also available in Arabic, is a lifesaving resource where public health infrastructure and the right to clean water and sanitation has been destroyed. The book provides simple instructions on how to prevent infectious disease such as cholera and treat its symptoms. Hesperian has also just released an Arabic translation of our fact sheet on cholera that provides clear, easy-to-follow information on preventing and treating this deadly disease.

Hesperian also worked with the CORE group to provide images for their recently released cholera teaching modules. Available in English, Spanish and French, these modules will be distributed in Yemen and Ethiopia, in coordination with UNICEF and WHO, where health promoters will use them to teach others about preventing cholera. To learn more about using Hesperian images in your work, contact [email protected].