Home > Get Involved > Join the Movement 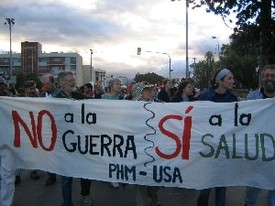 Throughout the world, individuals and organizations use Hesperian health guides to take action to improve the health of their communities, strengthening a global network working towards Health for All.

The People’s Health Movement (PHM) is a network of individuals and organizations with a presence in over 60 countries around the world. Rather than building one large organization with centralized campaigns and structure, PHM tries to energize and link together existing efforts at different levels — grassroots, district, national, international, organizing, lobbying and policy-making, academic and research, etc., in order to promote increased access to health, health care, and social justice. Hesperian has played an active role in PHM since its inception in Bangladesh in 2000.  For more information on PHM, visit the People’s Health Movement website.

Why Hesperian is involved

Hesperian became involved in PHM in order to contribute to the movement to improve the state of the world’s health. Because our publications, from Where There Is No Doctor through our current titles, have grown out of and became the practical handbooks for the Primary Health Care movement, this is a logical extension of our work. Hesperian also feels called to show our support and solidarity with people resisting the policies of  governments, international institutions, and corporations, many based in the U.S., which often seem designed to make people’s health worse and limit access to care. In order to achieve Health for All, all sectors of society must stand up and demand it. When the PHM steering committee asked Hesperian to begin organizing a People’s Health Movement in the U.S., we felt that we had no choice but to participate.

How you can be involved

You can get involved in PHM by reading and endorsing the People’s Charter for Health and subscribing to our email list. If you are based in the U.S., you can also join an interest group on access to health care, environmental health and justice, anti-militarism, health and trade issues, or workers’ rights and economic justice. If you are based in another country, please visit the People’s Health Movement website or email [email protected] to learn more about local activities. Please join us and let us join you in your work to improve people’s health.

Origins of PHM and the Primary Health Care movement

In 1978, at the Alma-Ata Conference, (PDF) health ministers from 134 countries, in association with the World Health Organization (WHO) and UNICEF, pledged to achieve ‘Health for All by the Year 2000’ and dedicated themselves to implement Primary Health Care as the means to achieve it.

Unfortunately, people’s health status has not improved and, in many cases, has deteriorated further. Two decades after Alma-Ata, we are still facing a global health crisis characterized by growing inequalities within and between countries. As people’s living standards decline, new threats to health are emerging and old threats are reasserting themselves. The forces of corporate-led globalization are preventing a more equitable distribution of resources, a necessary condition for the improvement of people’s health.

Within the health sector, the failure to implement Primary Health Care has significantly aggravated the global and local health crises. Pressure must be exerted on decision-makers, governments and the private sector to make “Health for All” a priority through the development and support of people-centered initiatives and to oppose the corporate vision of “Health for All Who Can Pay.”

In December 2000, in Savar, Bangladesh, delegates from around the world founded the People’s Health Movement and drafted the People’s Charter for Health to work towards achieving Health for All. Since then, PHM has grown through a number of international and local campaigns, meetings and exchanges, and a Second Peoples Health Assembly held in Cuenca, Ecuador, in July 2005.

Alma-Ata called on the world to achieve basic health care for all the world’s population by the year 2000 and recommended comprehensive primary health care as the best means to this end. Unfortunately, after Dr. Mahler’s tenure, WHO pulled back on this recommendation, and with UNICEF, the International Monetary Fund and others, began to concentrate on top-down single-issue campaigns, such as bed nets, micro-nutrients and immunizations.