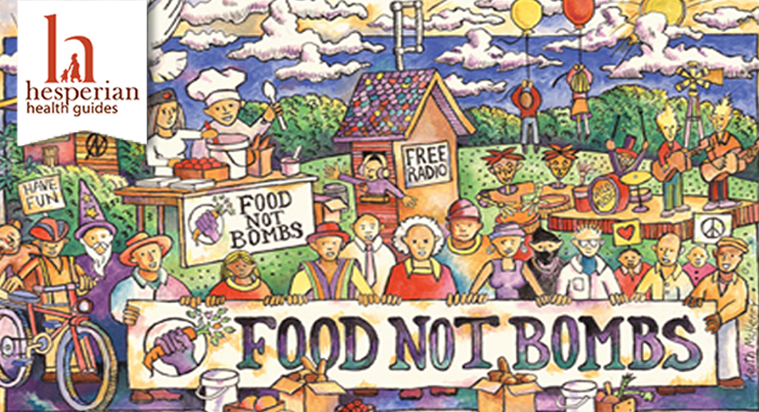 The coronavirus pandemic is making access to food even more difficult for people everywhere. The UN World Food Program estimates the number of people being pushed to the brink of starvation will double to 265 million. As UN Secretary-General António Guterres said, “We have the tools and the know-how to defeat hunger and malnutrition. What we need is political will and sustained commitment by leaders and nations.”

That’s what Food Not Bombs,  celebrating its anniversary on May 24, has been advocating for 40 years. Founded in Boston to show how the huge US military budget is a direct cause of poverty and hunger, Food Not Bombs chapters now challenge inequality and provide food for the marginalized in countries all around the globe.

As the response to COVID-19 pushes people into unemployment and hunger, Food Not Bombs continues to distribute food and feed people down the street from Hesperian in Berkeley and across the bay in San Francisco. In nearby Santa Cruz, they have provided homeless people drinking water, wash stations and hot meals every day since March 14th when other indoor food programs closed.

Food Not Bombs volunteers have been arrested dozens of times in the US and worldwide for the crime of feeding the hungry and challenging the system that impoverishes them. Hesperian and Food Not Bombs share the belief that the real crimes deserving punishment are driving farmers off their land, encouraging consumption of cheap processed foods that leads to  diabetes and obesity, and refusing to recognize access to food and nutrition as a human right. Happy 40th Birthday to Food Not Bombs! Let’s work to make its reason for existing disappear in the next 40!